API Specification Q2 Training: For One and For All 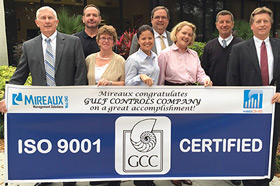 Before 2015, we rode one of the largest waves in the history of the Oil and Gas Industry. Everything was booming- companies, salaries, bonuses, cities, services, etc.  Then 2015 came and crashed the party, leaving us with an uncertain smile.  Now that we’ve just entered 2016, you may have some of your best people sitting somewhat idle at times; here is a suggestion for a 2016 New Year’s resolution: Become ISO [or API] certified.

From 20 + years of experience, I can assure you that becoming certified is one of the most rewarding endeavors a company may take in its life time.

Late in 2009, we got a call to help a machine shop become ISO 9001 certified. The company had been in business for 30 years, was doing business in a 45K square feet facility, and had just ridden the biggest waves at the time. Now in 2009, they were at the downfall of the cycle, dropping from 60 employees to about 30, and with not much work in the horizon. Production shifts were reduced and overtime was low, therefore, the President thought this was the best time to become ISO 9001 certified. The President was not entirely sold on the idea, but knew ISO 9001 was a good thing for a company, he knew the big service companies they catered to would like it, and he knew his own salesman would like it. I will never forget when the President told me, “We just went through the best times in our company, and I know we will never see anything like this again.” I remember asking clearly whether he thought that he will never see that again in his company or the entire market. He told me he was obviously referring to the oil and gas industry, which of course we all know now that the wave we rode in the past 5 years was the biggest ever. But, more on that next.

So our company, which at that time was mainly myself working out of our home office, was set to help them. They already had some good documentation and a quality mind set, and of course everyone was available for interviews, training, and helping when they were needed. Upon completing all the required documentation, deploying training, conducting their Internal Audit and Management Review, we enlisted DNV as the registrar to perform the certification audit. After the summer of 2010, they received their certification and despite the President still not being 100% convinced, what you will hear next may prove to you how ISO [or API] can definitely help.

From 2011 onward, as you all know the oil and gas industry boomed to a point that the words that had stayed in my mind “…We will never see anything like this again” were proven wrong. Not only did the prices shoot through the roof, but production and orders to manufacturers and service providers were at an all-time high. Our machine shop Client’s sales grew, and in 2014 they moved to a new spanking brand new, state-of-the-art facility with over 85K square feet of manufacturing space!

The example above represents a true case study to show that when times are down, the best idea may be to use the idle time and your best people to engage in a great endeavor, such as the one required to become ISO 9001, API Q1, or API Q2 certified. Both ISO and API require time in order to get your company’s processes tidied up and aligned well with the requirements of those standards, so using this new found time will help you get a good quality management system in place and not just a window dressing that will not add any value to your company – which you may otherwise be prone to do when everyone is busy. When you take the time to implement a sound quality management system where everyone participates in its creation and implementation, it will provide unparalleled efficiencies – let alone tremendous marketing benefits that will put your company ahead of your competitors.

Of course ISO requires a budget, and even more so with API, so cut down on contractors or consultant’s time by training your own employees well in order to give them the proper tools so they can do most of the work. But, make no mistake –if done right, the return on your investment will be equally proportionate to the effort you put in to comply with the standards; and the satisfacti

on your company and your employees will feel will equal or surpass the satisfaction you experienced when your company broke its first million.

ISO 9001 is a widely known quality management system standard for manufacturing and service companies. It has been around since 1987 and now accounts for over 1.1 million certifications worldwide. The latest revision was just released in September 2015. API Q1 is the American Petroleum Institute’s quality management system standard for manufacturing companies, now in its 9th edition, which represents a quantum leap from the previous 8th edition in terms of how much it can help an organization. API Q2 is also the American Petroleum Institute’s quality management system standard but for service companies. Its 1st edition was released in 2011, but certification did not open until 2014, therefore it is a very young standard. However, it carries the most punch of all because it has taken the best of all available standards. Although these are the most popular, other standards do exist for environmental, safety, etc.